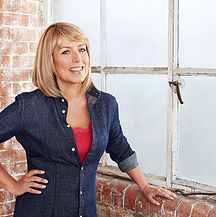 Renowned actress and BAFTA nominee Fay Ripley found fame as Jenny in the hugely popular drama ‘Cold Feet’. She has also starred in dramas ‘The Delivery Man’, ‘Suspects’ and ‘Monday Monday’. Film credits include The Announcement and A Mute Witness.

In the last few years Fay has found success as an award winning food writer in the form of ‘Fay’s Family Food’ and ‘What’s For Dinner’ with her latest book ‘Fay Makes It Easy’. She is an ad hoc presenter on The One Show and a recipe contributor to many publications. Fay lives in London with her husband and two children.

I had been making up bags of hygiene products over the winter months from some of the stuff I had sitting in my cupboard, to give to people living on the streets as and when I could. I did it because I didn’t really need these products and felt that the man or woman I saw sitting on the pavement deserved to be able to brush their teeth or shave or change their sanitry pad just as much as any of us.

So when The Hygiene Bank approached me I was delighted to put my efforts behind this powerful growing charity. How could I not? I love being clean. I get it. If that was taken away from me I’d be broken.