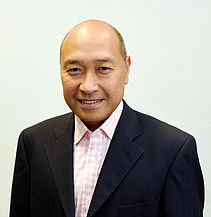 Edgar initially joined the charity in 2019 as a trustee and treasurer and has since become the CEO, after acting as interim CEO since early 2020.